Menu
Log in
Register
Install the app
You are using an out of date browser. It may not display this or other websites correctly.
You should upgrade or use an alternative browser.

Staff member
It's preferable to let them spend the entire season in the same pot but sometimes they have too good of an early start to their season or if you're familiar with my past mentions of the smooth form of Amorphophallus paeoniifolius, you're growing a species that is quite prolific. For species that do this it's usually a good idea to go for wider pots, or at least those with flexible sides. An important aspect to keep in mind is that they want to get bigger and will try their best under the right conditions. This often can lead to pots bulging or even breaking, putting unnecessary pressure on the tubers that could be damaging. 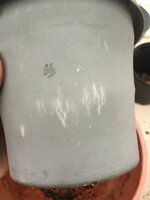 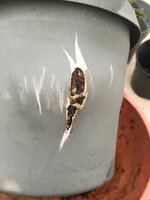 When it comes to growing big these plants don't mess around.​
The volunteer from the garden for this guide is a suspected Amorphophallus paeoniifolius "Thailand Giant" (there's been reports of two variants of large A. paeoniifolius but that's a thread for another day). Either way it is a beautiful plant to admire, and it certainly separates itself from the normal forms which usually have little variety in coloration otherwise. 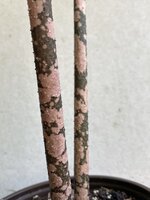 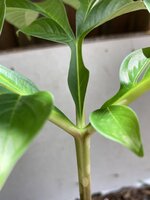 ​
Sometimes the plants will push out from the bottom such as this one causing the plant to slowly tilt ever so slightly. This isn't usually a problem unless it's a particularly top-heavy plant or isn't properly supported by the other other pots around it. Generally this all applies to smaller pots and plants because after a certain size it does become impractical. You can compare the difference in pot bottoms below. 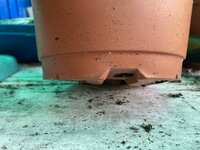 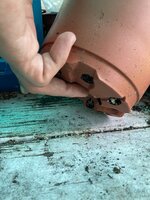 While the contents of the pot don't have to be recently watered it helps if the soil and roots are a little damp. Gently pushing up from the bottom center of the pot should be enough to get the plant, gently holding the petiole near the soil line. They're not as fragile as you may think but that doesn't mean you can yank it! 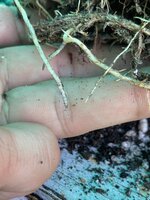 Once removed you'll be able to see the various anchor roots that have spent their time wrapping circles around the interior of the pot. Focusing again in that bottom center area and going outwards you can carefully pull the excess soil and untangle some of the root ends before place the plant in a new, slightly larger pot. 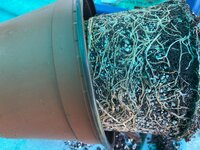 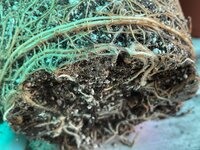 There roots seen here can be over a foot long! 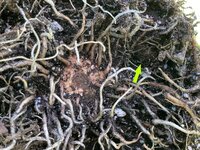 New tuber offset that was causing the bulge pinpointed with arrow.​
It isn't required to place the plant into a pot much bigger than the ones it was removed from. I usually put them in pots 1-3" larger in diameter than the original pot, followed up with an extra dash of fertilizer at the bottom of the pot before the plant is moved in. When you're done repotting it's recommended to water the plant in and add in extra dirt if the soil settles in too low afterword. Sometimes you may notice the leaflets and the petiole may be less rigid; it should bounce by within a day or two. It's a fairly straightforward and simple process! Remember, these plants are far more forgiving than people usually give them credit for!

If you're still unsure or would like me to further clarify some things, do not hesitate to let me know!
Top